If you or a loved one has taken Pradaxa (dabigatran etexilate mesylate), an anticoagulant or blood thinning medication used to reduce the risk of stroke in patients with non-valvular atrial fibrillation (AF), and have suffered dangerous, life-threatening side effects such as internal bleeding or hemorrhaging, heart attack or myocardial infarction (MI), please call The Brad Hendricks Law Firm. 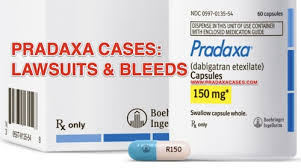 In 2010, the United States Food & Drug Administration (FDA) approved Pradaxa, manufactured by Boehringer Ingelheim Pharmaceuticals, Inc., as a direct thrombin inhibitor indicated to reduce the risk of stroke and systemic embolism in patients with non-valvular atrial fibrillation. Its popularity soon increased due to the perception that it was easier to use and modify than warfarin, with fewer interactions.

An investigation was launched less than one year later, in September 2011, after five New Zealand patients died from internal bleeding/hemorrhaging after taking Pradaxa. Mere weeks earlier, Japanese officials had notified the manufacturer that 81 elderly patients experienced heavy bleeding/hemorrhaging from March 14 to August 11, during which time five patients died. In the United States, the FDA received approximately 3,781 adverse event reports identifying Pradaxa use in 2011 alone-more than reports associated with any other drug monitored by the FDA.

No Known Antidote for Pradaxa-Related Bleeding

The FDA announced in January 2012 that it had approved changes to the Warning and Precautions section of Pradaxa’s labeling to include the following: “Lack of a specific reversal agent; futility of using vitamin K to affect anticoagulant effect.” There is no specific agent known to aid with the reversal of Pradaxa related bleeding. Vitamin K, a known antidote used to counter warfarin-related bleeding, is ineffective. The new labels also warned that Pradaxa’s anticoagulant activity and half-life are increased in patients with renal (kidney) impairment. Pradaxa was hailed as a safer alternative to traditional blood thinners like warfarin; however, warfarin bleeding may be interrupted by administering Vitamin K. Because Vitamin K is not effective to interrupt Pradaxa bleeding, the effects can be deadly. Risks increase with age, according to some reports.

Although anticoagulants are known to carry some risk of bleeding, patients who have taken Pradaxa have reported potentially harmful symptoms such as:

Pradaxa Injury Help You Can Count On

We want to know about your experience with this dangerous drug whose use may lead to fatal internal bleeding or hemorrhaging. Call The Brad Hendricks Law Firm today at (501) 214-0998 or (870) 330-0475 for a free consultation with an experienced team of lawyers and professionals. If you or a loved one has been harmed by Pradaxa, you can count us to fight to make sure you are compensated for your injuries.